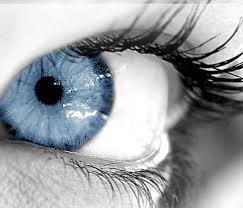 Which came first: color, or the ability to see them? Eyes evolved on Earth around 600 million years ago. Before that, things may have been a bit less colorful. Different colors in animals come from a variety of evolutionary tools. Yellows, oranges, and reds come from carotenoids in our diet. Cardinals' red comes from insects and berries, and flamingos absorb carotenoids from algae and tiny animals to become pink (without it, they're just white). And when we eat red, yellow and orange foods, animals can use those pigments to create color, but not for blue.

The color blue isn't as easily absorbed and secreted like other color pigments in nature. Instead, animals evolved physical structures to reflect light in just the right way. By studying hundreds of different species of birds, scientists from the Argonne National Laboratory found that keratin molecules inside feather cells actually change the way light is refracted so that only blue wavelengths of light are reflected. This is known as "Structural Color" as opposed to "Pigmented Color". Human skin can manipulate pigmentation to create different hues of browns, reds, and yellows, but not blue or green shades. Snakes and frogs can create blue pigments but not green ones. They appear green by adding a yellow pigment to a blue structural color.

Evolution of the Eye

The human eye is an exquisitely complicated organ. It acts like a camera to collect and focus light and convert it into an electrical signal that the brain translates into images. But instead of photographic film, it has a highly specialized retina that detects light and processes the signals using dozens of different kinds of neurons. So intricate is the eye that its origin has long been a cause célèbre among creationists and intelligent design proponents, who hold it up as a prime example of what they term irreducible complexity—a system that cannot function in the absence of any of its components and that therefore cannot have evolved naturally from a more primitive form. Indeed, Charles Darwin himself acknowledged in On the Origin of Species—the 1859 book detailing his theory of evolution by natural selection—that it might seem absurd to think the eye formed by natural selection. He nonetheless firmly believed that the eye did evolve in that way, despite a lack of evidence for intermediate forms at the time.